Are you raising a helpless or an independent child?

Times have changed and so are the ways of Parenting. Thanks to the fast paced life especially in metros…where youngsters look for all the reasons to escape from Marriage. Even when they are finally tied into this relationship with the pressures from friends and family ….they run away from the responsibility of becoming parents and avoid it as long as they can until they again fall prey to the pressures of family and society.

Due to the changing lifestyle, Most of the couples choose to become parents at a later stage and at times with difficulty too… That’s one reason they become so protective and sensitive that they don’t even realize when they start shielding their kids. They become so habitual of restricting their kids and impose their ways of doing things that they do more harm than good by not allowing child to function independently.

Parents unknowingly get into the way of anything and everything that leads to a child’s growth…be it social skills, his creativity or his self confidence.

Is that what we call overprotective or hypersensitive parents ?
Well, we all love and care about our kids…and panic too when the situation calls for but there are many parents who want to protect their kids even when there is no harm around… What I am trying to say is for instance if a kid is playing in a ground …they are repeatedly instructed not to play in the sand, not to get dirty, not to get hurt and so on…. Enforcing too many No’s & Don’t’s lead to overprotection and hampers childs confidence to be able to do anything by himself. Such parents constantly shadow their kids and direct their behaviour so much so that they end up deciding their friends too.

Isn’t falling n getting little bruises a part of growing up ?…

Where are the days when our parents let us free in the fields and brought us up rough & tough. 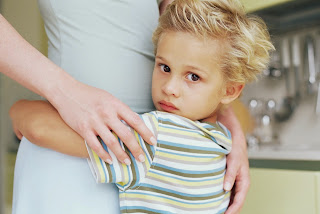 It’s not what you do for your children but what you have taught them to do for themselves, that will make them successful human beings. Ann Landers
Over concerned parents diminish the child’s growth mentally, which in turn effects their thinking and decision Making abilities.

Then what’s the right way to do it ?

The best way to see your kids learn and grow is to let them free… More than anything else they want a go-ahead to try different challenges in day today life… Nothing is more thrilling for them to be able to do things they see others do with ease.. Our mere presence for them is the assurance as well a protection that they need from parents.

World is a scary place to be and how can we let these little kids be on their own?
The best way to deal with all your worries as a parent is to make your kid aware of the little realities of life…and educate them of what can help them in situations that are not so safe as home.

I made my four years old remember my mobile number by letting him dial through the landline and spoke to him for fun. But I had never imagined this fun would one day turn out to be the biggest learning for him …

It was a sunday evening, I decided to take my son to a near by mall… While returning as we stepped out, he lost my sight watching other kids play and was in complete distress as he couldn’t place me anywhere …I also walked ahead thinking he is right behind me. Just after few steps I turned to hold his hands as I was nearing the main road …I was taken aback when I didn’t see him around… I ran back in a flash looking out for him, when I get a call on my phone… Usually I don’t pick unknown numbers … N especially in a rush I didn’t want to but something clicked and I answered the call….to my surprise a man called saying are you ronnie’s mother?…he is with me.

Totally baffled I rushed back in haste and spotted my son wailing out of anxiety …I immediately held him n broke down in tears … Though I quickly regained my composer to calm him down and took a sigh of relief.

This unanticipated episode not just left me perplexed but was also an awakening call for me. The thought what if he didn’t know my number kept reminding me how I needed to make conscious effort of making my child independent. I couldn’t have been more proud of my little baby’s presence of mind and brave act.. He not only remembered my number but also had the courage to walk up to someone and ask for help in a situation of distress …

This was the day when I realised kids are smarter than we think… Many times we make a mistake of treating them like kids and don’t pay attention to their thoughts and ideas but not to forget they are young minds of 21st century who can give a run for money to many people with their sharp brains.

We must share all important information to make them aware of what can happen and how can they safe guard themselves.

We can’t be with and around them 24/7 ..its always advisable to share with them what if something unexpected happens … How can they deal with it or seek someone’s help. Make them aware of the surroundings, the names of the places, your address, the route back home from near by places ect. Kids remeber what they are told, the general talks we share while travelling or at home can lead them to learn many facts of life.

Age is no bar for knowledge and learning. In fact kids learn faster than adults and moreover some of the greatest learnings have not been taught in school but were the mistakes made by few. The most important thing that we as parents can give our kids would be the freedom to think, act and speak.